THE HISTORY OF ISRAEL

The history of Israel is one of persecution, struggle, oppression and survival. Long before Jacob became Israel, since the ancient beginnings of Genesis, the Jews, and later their tiny nation, has been in a constant state of survival. From the moment of Abraham's arrival in the land of Canaan, God's people have been surrounded by enemies on all sides.

Over the course of its history, time and time again, this band of 12 tribes has faced extermination, yet today stands among the worlds elite. 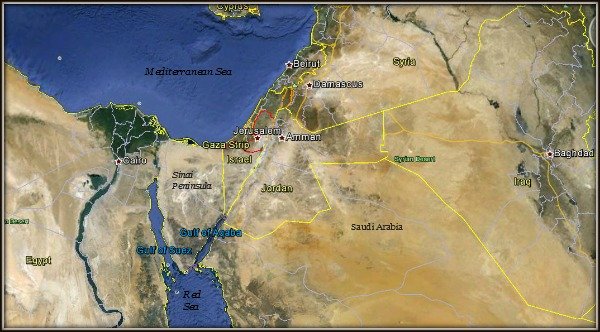 The history of Israel played out in the Middle East lands of today.

It is no coincidence that on the worldwide center stage is a country the size of New Jersey. Since the Pharaohs of Ancient Egypt, to the Caesars of Rome, to the War of Independence and Seven Day War in the 20th Century AD, Israel has been caught in the middle of power struggles amongst empires.

Born in the "Cradle of Civilization", the ancient Jews struggled against all odds to survive. The Old Testament Ancient Near East was made up of Palestine, Lebanon, Jordan, Syria, Iraq, Kuwait, Saudi Arabia, and the Zagros mountains located on the westernmost edge of Iran. It was here that the cultures and influences of three continents converged - Africa, Asia, and Europe. Together these three cultures each left its imprint on the history of Israel.

God's chosen people have faced persecution from nearly every single empire that has dominated the earth from the beginning of time. From the slavery of the Ancient Egyptians, to the Holocaust of the Third Reich, how is it possible that this tiny nation today stands so strong?

The answer can be found in the Old Testament. The first five books of the Bible make up the Jewish Torah, or, the Books of Moses. It is in these books that the history behind God's people is revealed.

God made a covenant with Abraham that stands as true today as it did centuries ago. And God has consistently delivered over the course of time. His latest deliverance was one of no less significance than anything found in the Old Testament.

In 1948, for the first time since 586 B.C., a Jewish state was created. God had once again brought His people together in the promised land. From the ancient banks of the river Chebar, the voice of Ezekiel can be heard saying;

"My people, and I will bring you into the land..." 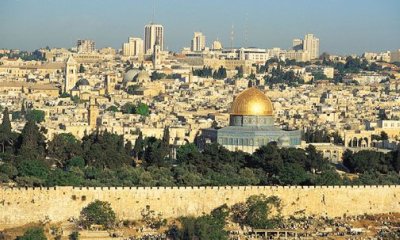 The Eastern Wall of the Temple Mount in Israel.

A VIEW OF THE TEMPLE MOUNT & GOLDEN DOME OF THE ROCK FROM THE SLOPES OF THE MOUNT OF OLIVES.

Please pray for the Christians in Iraq currently under attack by the barbaric acts of Radical Islam. Their struggle is one of life and death. God please protect Your children.

"Rejoice, and be exceeding glad: for great is your reward in heaven: for so persecuted they the prophets which were before you."

"If the world hate you, you know that it hated me before it hated you."

Click on the link to view this Old Testament timeline and various dates within the ancient history of Israel.

"The sun will be turned to darkness and the moon to blood before the coming of the great and glorious day of the Lord."

Throughout the history of Israel, to the present hour, conflict and war characterized the relationship with Gaza. King David repeatedly called Yahweh his rock, shield, fortress, deliverer, stronghold and Lord. May Yahweh continue to protect His inheritance as He did in the days of King David, especially during the current heightened conflict with the Gaza Strip.

"Blessed are those who are persecuted because of righteousness, for theirs is the kingdom of heaven." --Matthew 5:10

Israel-a-history-of.com extends a thank you to the many visitors from around the world. Persecution of the Christian & Jewish faith continues in many corners of the globe, from Boko Haram & Radical Islam in Africa & the Middle East, to the Russian invasion of Ukraine and registration of Ukrainian Jews. May God protect, bless and be with His people in every nation, state and corner of the globe.

Anti-semitic ads may appear on the site from time to time. Israel-a-history-of.com aggressively seeks to locate and block these messages, and apologize for the appearance of such material. If you stumble upon an ad, please inform us and it will be blocked immediately. The efforts to undermine God's people are at every corner, and take every angle. Thank you for your understanding and help in this matter.

When contacting www.israel-a-history-of.com via the Contact Us tab, please include your email address. Thanks to all of those regular visitors and contributors to the website. The submissions and comments grow daily, as well as those visiting the site. Thank you for taking time out of your day, and please give us your insights!

The Sage of Brush

There are those whom believe that Joseph's wife was an Egyptian. I tend to disagree with this thought. The scepter was Judah's but the birthright belonged …

Who were the Palestinians in the Bible? While doing a word search in three different versions I cannot find the word Palestine or Palestinian. Thank you …

Shalom as a true heart form me, May YHVH come and straiten out all the unequal of yoke. To no hurt I send this as I seek in private time with our Creator, …

I think peaceful relegions like xtianity. hinduism. buddism etc should regularly meet and propogate tolerance and basic morals. they should be steadfast …

I am seeking the truth about what God said before the world decided what to put in, or leave out, of the message we were all meant to know!! I just want …

I have a need to know about Israel from the beginning. I have a burden for Israel, I love the country. Send me more information please.

Revelation 13.8 All who dwell on the earth will worship him, whose names have not been written in the Book of Life of the Lamb slain from the foundation …

Who are the Israelites?

Some people say that Jesus will return for His people, from what I hear. Were the chosen people the dark skinned people? Is this true or false?

Student of the true Gospel

I consider myself a Yahshuan (Son of Yahweh). I renounced Christianity about 30 years ago. The name, Jesus, is erroneous for the simple fact that in …

the RETURN of the GARDEN of EDEN

Jewish Eschatology explains that at the END of TIME the GARDEN of EDEN will Return. Well guess what it has RETURNED and I discovered IT ten months ago. …

ABOUT TORAH, BIBLE AND KORAN Not rated yet
TORAH WAS THE FIRST MESSAGE FROM GOD TO PROPHET MOSES,..BEFORE,.. FATHER ABRAHAM WAS THE FIRST PERSON WHO HAD FAITH AND LOYALTY TO THE GOD (WHO IS A UNIQUE …

The Gilgamesh Ark Not rated yet
Picture speaks for itself.