The Tower of Babel is recorded in Genesis 11. Genesis 10 gives the descendants of Noah and his sons; and also gives the architect and ruler of Babel - Nimrod.

"Now the whole earth used the same language and the same words. And it came about as they journeyed east, that they found a plain in the land of Shinar and settled there."

One must keep in mind that a great amount of time had passed since the flood. Interestingly enough, however, the people of the earth were still using the same language. Migration naturally occurred, and a group of people went east until they found a hospitable spot.

That spot was in Shinar, or Babylon - southern Mesopotamia near the mouth of the Persian Gulf. The Gulf would have been farther back in antiquity than it is now, yet the land was watered by the mighty Tigris & Euphrates Rivers, and was flat which invited settlement and farming.

Genesis 10:8-10 describes the lineage of the Tower of Babel's architect, Nimrod. 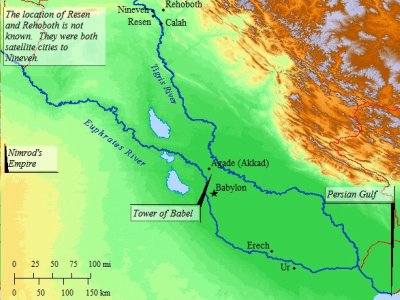 Nimrod would not stop with Babylon, however, as verses 11-12 describe his conquest of Assyria and building of Nineveh, the great Assyrian capital. But without question Nimrod's most famous exploit is the Tower of Babel - that great and mysterious tower reaching into the heavens.

Genesis 11:3-4 portray the planning and motive of the Tower of Babel.

The first thing to take note of is the material used to build the tower. Bricks are the primary material the Bible mentions. Bricks would later be made by the Hebrews under Egyptian bondage. As Shinar was in ancient Babylon, history has unveiled the material and process involved in ancient brick-making.

The Septuagint (LXX) specifies "their mortar was bitumen", translated as "tar" above. This was a common resource in the ancient Near East, used to coat the infant Moses' boat. It was prevalent in the vale of Siddim - or Sodom & Gomorrah.

Bitumen was a resource used extensively in the ancient world. Bitumen deposits would have added a tremendous amount of wealth to the region. It would be comparable to the oil deposits found throughout the modern day Middle East, and the wealth these deposits bring to those countries.

Bitumen is a black, oily, gelatinous and highly flammable material. It is also known as tar, or asphalt, and had many uses in the ancient world. It has been shown to have been in use by Neanderthals as an adhesive to fix handles onto their tools. Some scholars claim bitumen has been in use for some 40,000 years. It is closely related to petroleum, oil and sulfur.

In Mesopotamia and throughout the ancient Near East bitumen was used extensively as mortar in the construction of palaces, temples, ziggurats, and houses.

The mortar, or bricks mentioned in Genesis, were made by mixing bitumen with chopped straw, sand, and clay. These were the bricks of the Tower of Babel.

Evidence for such construction exists in the Ziggurats of Ur, which show bitumen used in their construction. The Darius Palace in Susa was constructed using bitumen.

Sargon the Great is said to have floated down the Euphrates as an infant in a bitumen coated reed basket, bringing to mind images of an infant Moses, mentioned above, floating down the Nile River in a reed basket pitched with bitumen.

In fact, ancient Egyptians used the substance in the mummification process, and also as a medicinal remedy, particularly as a disinfectant. They also used it as an insecticide of sorts. Bitumen was also used to waterproof containers, wooden posts, palace grounds, bathrooms, etc. Large lumps of bitumen have been discovered in Oman, used to caulk reed and wooden boats.

Bitumen was also used in the making of jewelry, domestic items such as dice and balls, sculptures, and as a coating for roads. In addition, bitumen was an adhesive, used to repair tool handles, sickles, jars, and as an aesthetic decoration on walls in palaces, houses, temples, and in courtyards.

The versatility of bitumen made it a highly sought after resource, and any region where it was found would logically profit from its presence. This is another reason why Nimrod and his followers would've chosen to settle in the area. 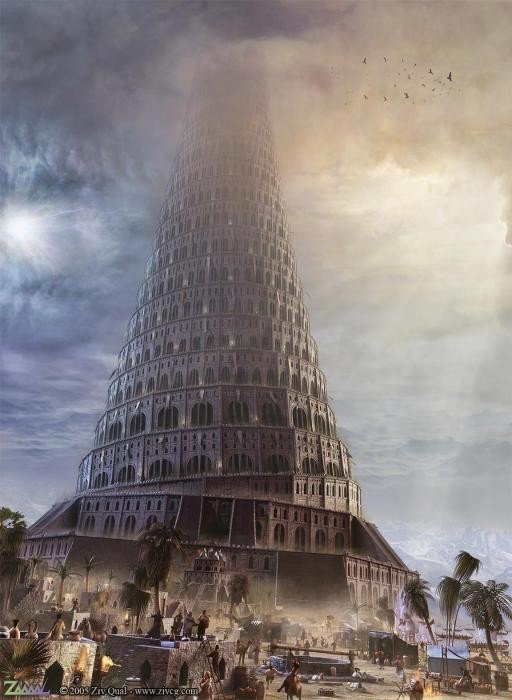 The reason for building this tower was not only to reach the heavens, but to honor heaven and its angelic host.

The word "unto" suggests an offering, and this tower was an offering to heaven and its host. It would serve as a temple, a central altar, where man could offer sacrifices and worship.

This tower would dominate the city. It would be the crown jewel, architecturally, culturally, socially and spiritually, of the empire. It would be a symbol of man's unity and strength.

Scientists have debated just how high they could've built the Tower of Babel. The History Channel's Ancient Discoveries: Lost Science of the Bible addressed the issue through scientific experiments.

The Tower of Babel would've been  constructed of bricks made by combining bitumen, sand, straw, clay and other materials together and forming them into bricks. These bricks were then placed in the sun to harden and dry.

Using the method described above scientists showed these bricks described in Genesis could withstand pressure enough for a pyramid to be built just over 500 feet high. This is roughly the height of the Washington Monument. Though tall, it is unlikely to inspire such dramatiic descriptions of reaching unto heaven, and drawing the eye of God Himself.

However, the Bible hints the bricks used by Nimrod's construction crew may have taken advantage of newly discovered technology of the time - heating bricks with fire, or in a kiln.

'Come, let us make bricks and burn them thoroughly.'

Bricks heated by fire prove to be much harder, able to withstand over 8 times the amount of pressure as bricks dried by the sun. These same scientists showed bricks of this nature could withstand a pyramid 10,500 feet in height! This would be a pyramid two miles high - and surely anything remotely close to this would warrant the dramatic descriptions in Genesis!

Indeed the Biblical description tends to lend itself to a building of enormous proportions, unlike anything the earth had seen before. So impressive, in fact, that in verse 5;

"And the Lord came down to see the city and the tower which the sons of men had built." 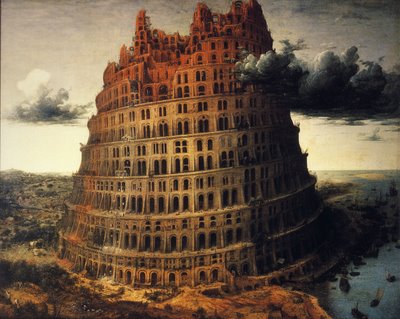 Nimrod instituted governing bodies of priests to regulate and oversee worship. Verse 8 suggests that though the tower was not finished, it was in use at the time when God came down to look in on the construction.

Ornate decorations would have adorned the ceilings and staircases of the temple.

Emblazoned scenes of stars and heavenly bodies filled the empty spaces in the ceremonial rooms throughout.

The stars began to assume identities, such as Leo the great King of Heaven, and perhaps these identities were shown in sculptures and statues that lined the staircases and doorways of the tower.

The beauty of the tower was surely breathtaking. In fact, so impressive was the Tower of Babel that God Himself commented, "now nothing will be restrained from them, which they have imagined to do".

As a result, God saw it necessary to scatter the people to prevent further corruption and moral degradation. To accomplish this, God confounds the language of the people in Genesis 11:6-7.

"And the Lord said, 'Behold, they are one people, and they all have the same language. And this is what they began to do, and now nothing which they purpose to do will be impossible for them. Come, let Us go down and there confuse their language, that they may not understand one anothers speech.' "

The word "confound" is the Hebrew Balal, and means mingled, or mixed, and by extension confusion. The English word "babble" is an example of an onomatopoeia, a word formed to imitate an actual sound.Thus during the construction of the tower, man's speech came to sound as babble to the other men. Hence the name, the Tower of Babel.

The very name Babylon would come to represent the city of babbling, or confusion. Babylon, in fact, has since been a center of religious and political confusion.

Babylon was an ever constant threat to Ancient Israel, both spiritually and physically, and continues to be a threat to this very day. The states of Iraq, Iran and Syria continue to be in a constant state of confusion - marred by war and instability.

Genesis 11 & The Tower of Babel - biblegateway.com

Back to the Tower of Babel

Do you have an opinion on Nimrod? What are your thoughts on the Tower of Babel? Share Your Thoughts and Comments here!

The Flood in Genesis & The Tower of Babel Not rated yet
The tower was started 130 years after the Flood. Those who add 600 years and who add 720 years are false. The Great Pyramid was then 200 years after the …