The Nile River dominated ancient Egypt geography. Ancient Egyptian civilization flourished as a result of the Nile. From around 3200 B.C. onward Egypt, like Mesopotamia, became a powerful center of civilization in the ancient world. The mighty nation exerted a powerful influence on the history of Palestine and the Ancient Near East.

So ancient was Egypt that when Abraham fled the famine in Canaan and crossed the Sinai into Egypt, the Pharaohs had been ruling for over a thousand years already!

Egypt's Pharaohs consistently interfered with the affairs of Canaan in order to secure trade routes. Ancient Egypt geography was dominated by desert regions to the west, east, and south. To the north lay the Mediterranean Sea. Great trade routes led across the Sinai into the heartland of Canaan. It was vital Egypt exert some influence in the region in order to prosper through relations with eastern powers. 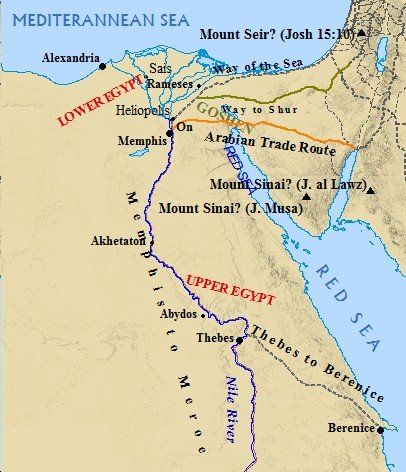 A map of ancient Egypt depicting both Upper and Lower Egypt.

The Egyptians wished to exploit these trade routes and to provide a zone of security between Egypt and the eastern powers of Mesopotamia. Ancient Egypt geography dictated the easiest route of invasion lie across the Sinai. Canaan, especially the Negev, was of keen interest to the Egyptian Pharaohs.

The geography of ancient Egypt is composed of two geographical regions, Upper Egypt and Lower Egypt, with modern day Cairo acting as the divider.

North of Cairo deep alluvial sediments deposited by the Nile formed a great Delta. Ancient Egypt geography used to consist of many branches flowing from the Nile into this region. Today, however, only two branches remain.

Great cities such as Sais and Bubastis emerged from this region, along with the Biblical cities of Pithom and Raamses (Exodus 1:11). The northeast Delta is the closest part of Egypt to Israel. Throughout the history of Israel and Egypt commerce, war, travel and trade have flowed freely between these two regions.

It was in the northeast Delta that the land of Goshen was located. Here the Israelites toiled under the Egyptian yoke during the 400 years of slavery. Genesis 45:9-11 and 46:31 speak of the patriarchs traveling frequently to Goshen. It was in this region that Abraham fled to escape the famine in Palestine.

The Nile Valley rests south of Cairo. The desert, just as influential on ancient Egypt geography as the Nile, limits settlement only to those areas that are affected by the Nile's annual flood. The Nile Valley is never more than a few miles wide, consequently settlements are packed into a small sliver of land. The contrast between the brown, barren desert and green, fertile and lush Nile Valley is striking.

Prominent cities in Upper Egypt include Abydos, Edfu, and Thebes. Thebes is the biblical No-amon, and was known for its temple to the sun-god Amon-Re. Across from Thebes, among the cliffs of the western desert, rested the Valley of the Kings. These cities personified Egypt in its most glorious era.

The Nile River was by far Egypt's most precious resource. The Nile was Egypt's life vein. The Greek historian Herodotus called Egypt "the gift of the Nile". This river linked the cities of Egypt together. It provided transportation, and was the main highway of communication throughout the empire as well.

The Nile shaped ancient Egypt geography, culture, settlement, worship, harvest and the well being of Egypt's citizens. The uncanny regularity of the Nile's flooding would leave behind water for the land, as well as a thin new layer of extremely fertile soil.

The Nile River flows from South to North, emptying into the Mediterranean Sea. Water from the Ethiopian (Cush) highlands in the south runs down stream to form the sources of the Nile River. Melting snow and rains pour into the Blue Nile and Atbara rivers, which join the White Nile river to jointly form the Nile River.

The rushing water of these three rivers carry sediment and organic materials, depositing its load into the Nile. The water from these rivers would also swell the banks of the Nile. From July to September these banks overflow soaking the land with water, and leaving behind a layer of rich and fertile silt.

Once the waters receded, Egyptian farmers would reclaim their fields and prepare the land for planting in this newly deposited, fertile soil. Egyptians developed a method for measuring these rising flood waters. Since all of Egypt's agriculture depended on the annual flood, it was vital for the Egyptians to be able to measure and monitor the Nile.

The balance between prosperity and disaster rested precariously on the Nile River's flood. A rise of 7 to 8 meters was ideal. More water meant devastating floods. Less water was known to produce famines, like the famine Joseph experienced in Genesis 41:53.

Egypt was also the benefactor of a favorable climate which accompanied friendly geography. Though rainfall is scarce, hence the dependency upon the flooding of the Nile, long, hot summer days, and mild winters, generated ideal crop growing conditions. Egypt was also impervious to the storms and intense weather changes that affected other lands in the Near East.

Heavily fortified garrisons protected the 6 cataracts along the Nile in the south. The desert bordered Egypt on the east and west, and the Mediterranean provided protection in the north. 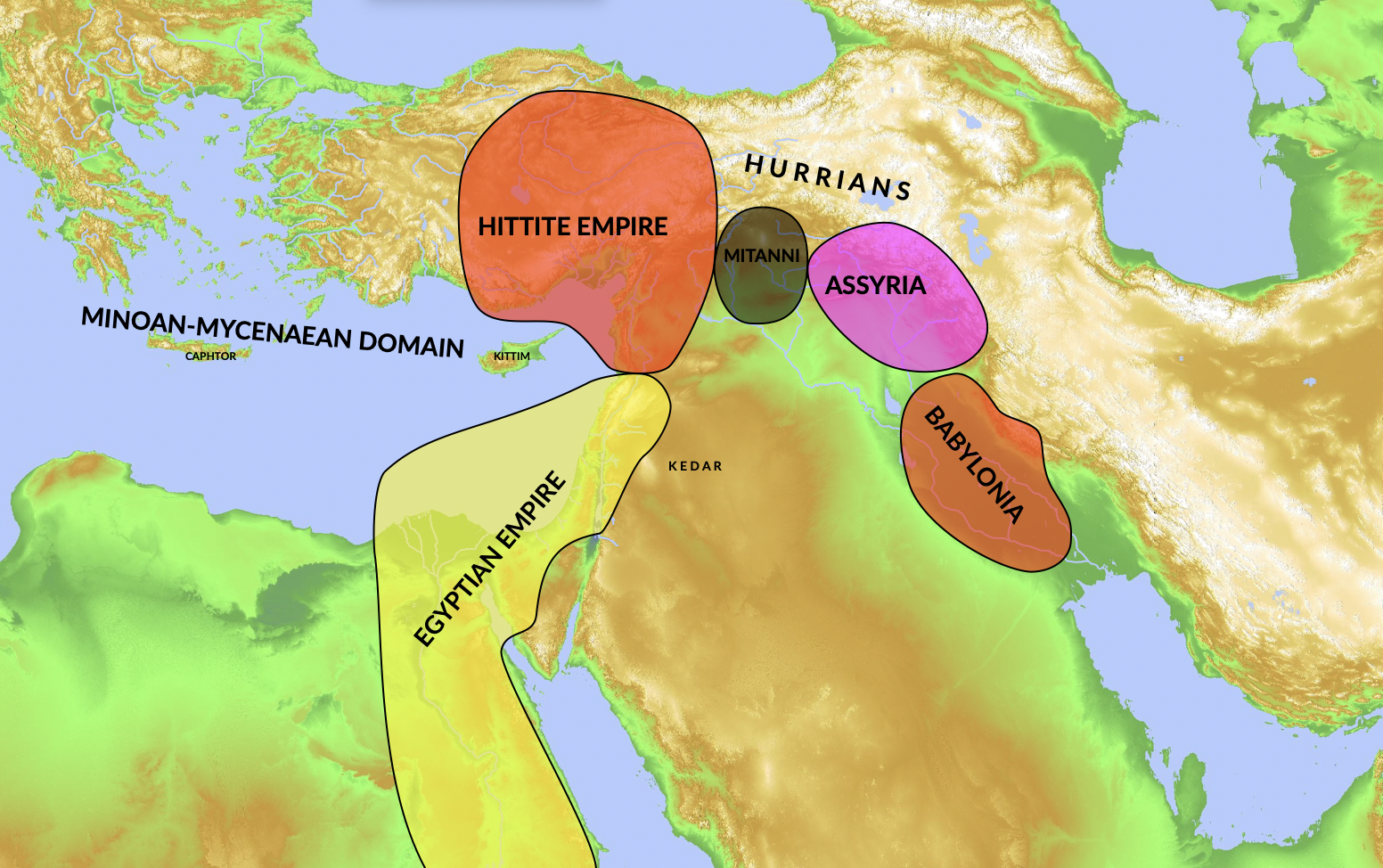 Empires of the ancient Near East.

Egypt's most vulnerable region lie in the northeast Delta. It was here that traffic chiefly entered into Egypt. Throughout ancient Israel Israelites entered Egypt frequently in times of trouble or distress. Great trade routes ran from Israel, across the Sinai, into Egypt. These routes allowed for easy entry into the country. These routes also made Egypt vulnerable to attack.

As a result of this vulnerability, the history of Palestine is dotted with Egypt's constant attempt to extend it's control beyond Palestine into Syria - effectively extending the buffer zone between Egypt's outer limits and the country's heartland. These excursions brought Egypt into conflict with its neighbors, most notably the Hittites, Mesopotamians, Assyrians, Israel and Judah - among untold others.

However, it also allowed for international travel - such as the visit of the Queen of Sheba to Jerusalem during King Solomon's reign, described in I Kings 10 and II Chronicles 9. Travel between the two regions was also popular during the time of Jesus, as is evident in the story of Phillip and the Ethiopian in Acts 8.

The close relationship of Egypt and Israel cannot be denied as the two are inextricably linked.

Are you a student of Egyptian history? Palestine history? Give us your expertise! Click on the above link to share your insights, thoughts, comments, and questions!

Samuel Sharpe (1799–1881) was an English Unitarian Egyptologist and translator of the Bible. His work, published in 1849, along with Joseph Bonomi the Younger, an English sculptor, artist, Egyptologist and museum curator, provides valuable insight that has stood the test of time in The Chronology And Geography Of Ancient Egypt. Click on the link below to be re-directed to barnesandnoble.com and dive into the world of ancient Egypt!

The Chronology and Geography of Ancient Egypt

Back to Ancient Egypt Geography