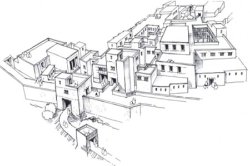 In 1982, near Ras Shamra, a Syrian farmer was plowing his field when his plow struck something in the dirt. The farmer noticed a slab of rock protruding from the ground.

Upon closer examination, he noticed the edges were unusually square for a natural object. After removing the rock, he discovered an underground vault.

Inside this vault, undisturbed for thousands of years, the peasant farmer discovered vases, jugs, tablets, gold, silver, and pieces of ivory.

Five levels of occupation were unearthed. The earliest dated to a pre-pottery age. Most of the excavated work took place at level one, which dated from 1600 to 1200 B.C. 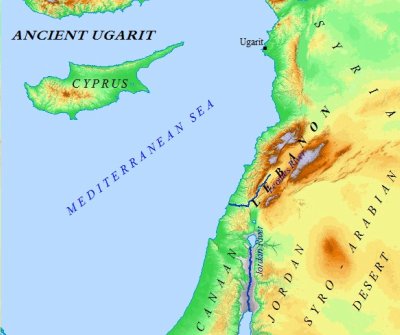 Scholars eventually deciphered the strange language, and discovered it was Ugaritic. The decipherment of this language opened up a wealth of knowledge enabling scholars to interpret previously impossible passages.

The City of Ugarit at Tell Ras Shamra by Marquerite Yon is an in-depth view into ancient Ugarit. Charts, photographs, layouts and professional drawings illustrate the archeology, culture, atmosphere, and image of this ancient city. One also gains a thorough understanding of Canaanite religion through the ancient Ras Shamra texts. Click on the link below to re-direct to Amazon.com.

The City of Ugarit at Tell Ras Shamra

The variety of languages found was even more astounding. Sumerian , Akkadian, Hurrian , Hittite, Egyptian, Ugaritic, and local Canaanite dialects were discovered as well.

The Ras Shamra texts make special mention of the Apiru in reference to runaway slaves. One source mentioned runaway slaves had grown accustomed to finding asylum with the Apiru.

Slaves would seek out these Apiru after crossing on the Ras Shamra side of the border with the Hittite Empire.

The Apiru are again shown operating outside the bounds of local law, as concealing a runaway slave was against the law. It was expected that runaway slaves would be extradited back to the countries from which they had fled. The Apiru, apparently, were not swayed by such policies, despite their proximity to the Hittite Empire. 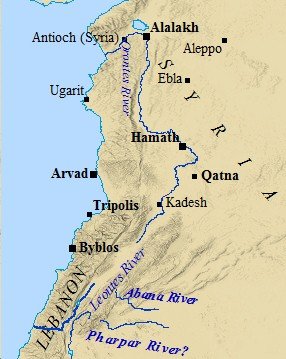 It is interesting to not the similarity between the Hebrew and the Apiru in regards to their social status. Both groups are often portrayed in bondage of some sort.

The Old Testament often portrays ancient Israel under enslavement of one kind of another. These enslaved individuals are referred to not as Israelites, but as Hebrews. This term not only applies to the enslaved Israelite, but also the exiled Israelite, such as in the case of David. David is a remarkable Habiru-like figure in the Old Testament.

His bloodline separates him as Hebrew. His lifestyle is certainly that of a Habiru. The Hebrew, like the Habiru, oftentimes found themselves playing the role of a fugitive exile or slave, seeking asylum and protection.

The Old Testament mirrored the Ugaritic Apiru in its treatment of runaway slaves. This law is found in Deuteronomy 23:15-16.

"If a slave has taken refuge with you, do not hand him over to his master. Let him live among you wherever he likes and in whatever town he chooses. Do not oppress him."

This echoes the view of the Mari tablets concerning the freedom allowed those seeking refuge, as opposed to those fleeing, or defecting.

It is interesting such parallels in law are found in the Old Testament, and texts from Mari, and the Ugaritic documents. Perhaps the ancient Hebrews knew their descendants had likewise experienced enslavement, and sought to protect the less fortunate. Though much remains in debate, certain facts about the Habiru are agreed upon by most scholars.

The Habiru seem to pre-date the earliest known evidences of writing. They were already established in Sumerian society as far back as 2000 B.C.E.

They predate Abraham by at least a few hundred years, however, the truth about their origins remains a mystery.

They are scattered hundreds of miles apart, existing simultaneously all over the Near East. The Habiru are not confined to one geographical region, nor are they defined by a particular language, or religion, or ethnicity.

Habiru are found throughout the Near East In fact, the Habiru are strictly bound together by their social status. They are not politically united, nor do they have a defined social structure.

Their lack of defined status is often a result of their existence outside the bounds of typical society. They appear frequently involved in legal disputes of various kinds. 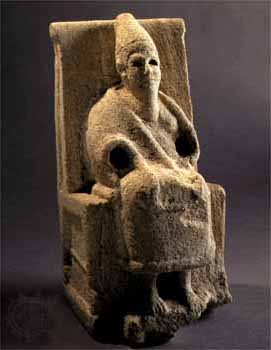 However, on the other hand, they appear at all different levels of society undertaking tasks from military employment, shepherds, princes, government officials, priests, mercenaries, nomads, farmers, and musicians, among others.

In various texts they are portrayed as lawless, outlaws, vegabonds, refugees, and immigrants, among other things. They do not fall into any one defined category of existence, on any level.

Yet, they are so wide spread as to permeate nearly every aspect of life in the second millennium.

The discovery of the library was a literary gold mine for ancient scholars. Texts revealed a number of illuminating facts about ancient life.


The Habiru were not absent from these texts, further evidence of their proliferation in the ancient world.